Flinty's Boardwalk
In 1995, the Flinty Committee started building a boardwalk around the shores of Ross Lake. The distance of the boardwalk from its entrance to the rock face is a pleasant 2.2 km. Where the boardwalk ends, Flinty's Trail begins adding an additional 2 km's leading to the uptown area of Flin Flon. Manitoba Avenue offers a second entry point about one-third of the way. Citizens can purchase a "piece" of the boardwalk and have their name inscribed on the boardwalk. To purchase your "piece" and receive your title, please call City Hall at (204) 681-7511, or print and fill out a form and mail with payment to 20 First Ave Flin Flon, MB       R8A-0T7. 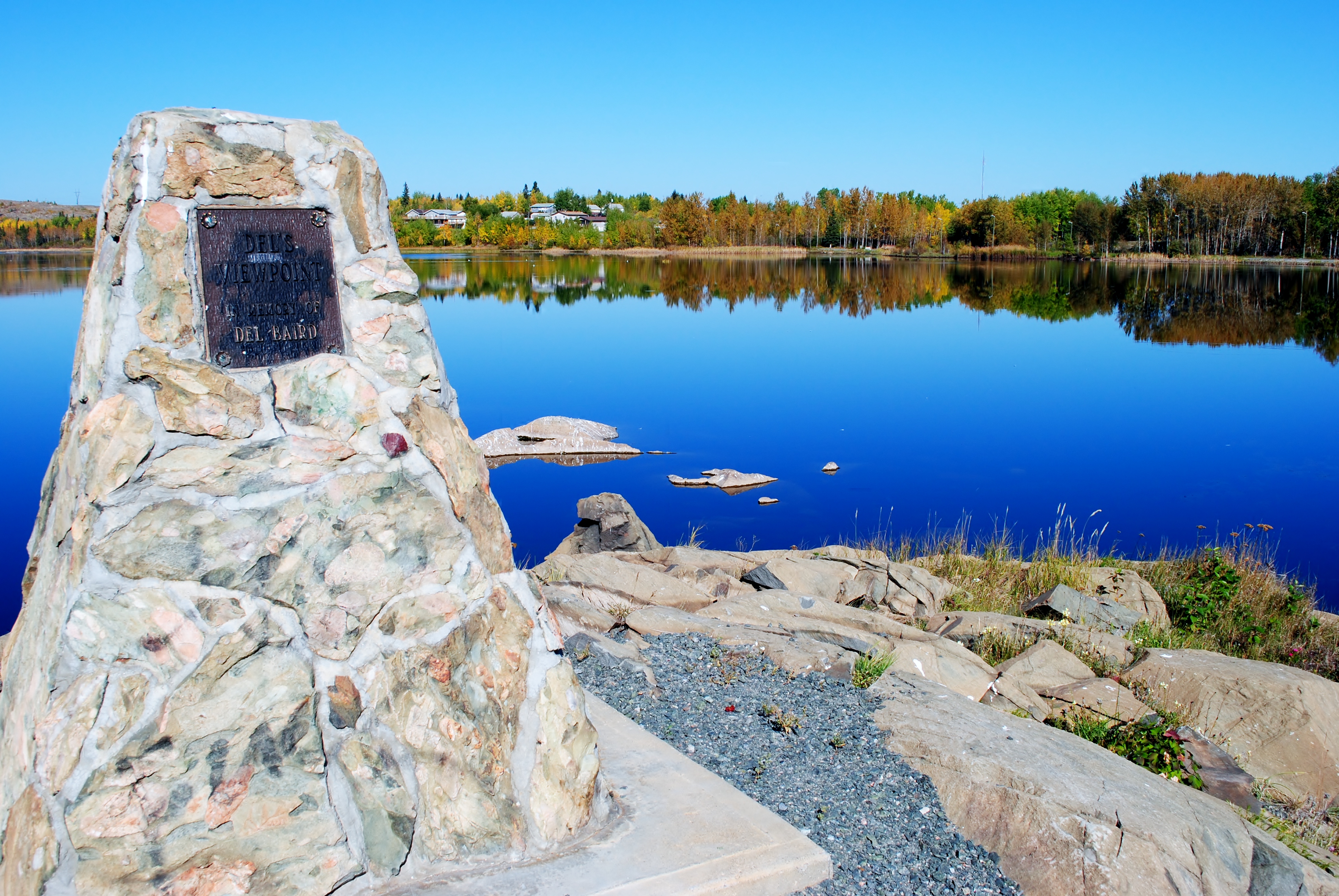 Ross Lake with its spectacular cliffs is situated in the middle of Flin Flon – see attached map.  In the late 1980s, our committee was set up to exploit the possibilities of this feature of the landscape for the benefit of local citizens, and as an important tourist attraction.
Among the ten members of the founding committee was the late Delores Baird, Graham Craig - who was at that time Mayor of the City, three members of the Greenstone Community Futures Development Corporation, and a staff member of the local HRDC office.  The lakeshore was cleaned up, the Boardwalk built, and a trail was constructed to the northwest corner of the lake.
Major funding for these early developments came from an HRDC employment program, the City of Flin Flon, the Rotary Club and various fundraising initiatives – including the sale of Boardwalk boards.  A number of local businesses also made valuable contributions.  Since then, steps have been built to the top of the cliffs – making it possible to walk right around the lake, and the Flinty Boardwalk Park has been developed - with the Flinty submarine monument as its centrepiece.  The Spruce Trail – which connects the residential area at the northeast end of the city with the trail around Ross Lake – was completed in 2008.  Lights were installed in the Park and along a 1-kilometre section of the trail in 2010, and an observation deck and connecting trail were put on the highest hill in the area in 2011.
In recent years, major contributions towards Flinty projects have come from Manitoba Culture, Heritage and Tourism Community Places grants, Neighbourhoods Alive!, the Hudbay Minerals Inc 80th Anniversary Fund, Manitoba Hydro, the Northern Neighbours Foundation, the Joe Brain Foundation and the Manitoba Recreational Trails Association.  Active members of the Flinty Committee at the present time are Dave Price (chairman) 204-687-8653, Graham Craig (past-chairman), Lois (Bunny) Burke (secretary/treasurer), Roger Poirier, Tom Morrison and Lorie Nelson.  The Committee is associated with the City of Flin Flon – for example, its members are covered for liability purposes by a City insurance policy - the City also assists in our fundraising by handling the sale of Boardwalk boards.
The Boardwalk, trails, and park are an amenity for all the inhabitants of Flin Flon and area (10,000 or so), as well as for visitors.  In recognition of the value of its work, the Committee received an "Attractions Canada” award in 2002, and in October 2012 we were presented with the "Community Ambassador Award” at the annual gala banquet hosted by the City of Flin Flon and neighbouring communities, the Chamber of Commerce and Community Futures Greenstone.
Map of the Flinty Boardwalk & trails